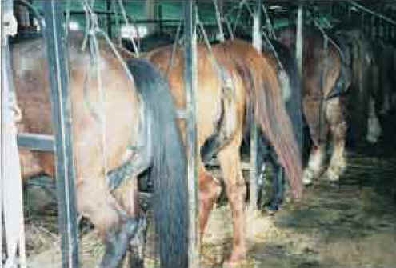 A popular women’s horomone drug, Premarin, is created by harvesting the estrogen from pregnant mare’s urine. Premarin stands for PREgant MAres uRINe.  The horses used to produce this drug are referred to as “PMU” horses, for short.

The mares are typically kept in small standing stalls in order to limit their movement, so not to displace the urinary bladder bags used to collect every drop of urine. The mares are kept in this manner for a lengthy portion of their pregnancy, normally about six months. Once the mares are full-term and ready to deliver, they are turned out to have their foals. The mares are able to nurse their foals until weaning age, about 4 months, at which time they are separated and the mare is bred back to repeat the whole process again. This cycle of breeding has created an overabundance of unwanted foals, most of which are sold to the slaughter industry. “PMU” farms exist all across the USA, and are also prevalent in Canada. Conditions at “PMU” farms vary, and some farms work very diligently to place their unwanted foals. Many others are not as responsible. More information can be found at Premarin.org.

February 2016: An expected increase in contracted volumes of pregnant mare urine over the next two years is a small bit of good news for Manitoba’s long-beleaguered PMU industry.

Pfizer Canada says it will increase the amount of PMU collected from ranches in Manitoba and Saskatchewan during 2016 and 2017.

Industry officials cautioned the announced increase in volume will probably not have a major impact on PMU production.

“From our perspective, it’s not going to be anything of any significance,” said Norm Luba, executive director of the North American Equine Ranching Information Council, a non-profit association in Louisville, Kentucky representing PMU ranchers.

Still, it is a welcome development for a once-booming industry reduced to a shadow of its former self by severe cutbacks over the last 15 years.

It is believed to be the first increase in contracted PMU volumes since Pfizer bought Wyeth Inc., the previous Premarin manufacturer, in 2009.

Pfizer would not reveal the amount of the increase, nor would it say how much PMU it currently contracts from its 19 operations.

“It will be a small increase over the current amount that we contract,” was all Christina Antoniou, corporate affairs manager for Pfizer Canada in Montreal, would say in an email message to the Manitoba Co-operator. “We are currently in the process of contracting for 2016-17 and therefore cannot provide any further details.”

But she indicated some previously mothballed PMU operations could reopen as a result.

“We can confirm that we are in discussions with ranchers who have existing facilities for this type of operation. Our rancher suppliers are, and will continue to be, those with outstanding credentials in horse management and welfare.”

Antoniou indicated a recent improvement in Premarin sales is responsible for the increase.

“The amount of estrogen we require from our ranchers has always been driven by product demand.”

At peak, Wyeth contracted with 450 PMU ranches in Manitoba, Saskatchewan, Alberta and North Dakota. A plant in Brandon, established in 1966 and still in operation, processes PMU into Premarin.

Manitoba was the hub of PMU production during its heyday. In 2002, the industry contributed $61 million to the province’s economy through sales of PMU and live animals.

Menopausal hormone therapy (MHP) was widely prescribed during the 1990s to treat menopausal symptoms. But a research study by the Women’s Health Initiative (WHI), begun in 1991 and published in 2002, suggested MHT increased the risk of heart attack, breast cancer, stroke and blood clots.

The results caused a sharp drop in MHT use and a decreased demand for Premarin as a result. PMU operations ceased completely in North Dakota and Alberta and were gradually reduced to a mere handful in Manitoba and Saskatchewan.

However, MHT slowly recovered after an expert panel reviewed the WHI study. It found the conclusions did not apply to most menopausal women starting MHT, a group the WHI did not study.

Today, according to the Hormone Health Network, scientific evidence suggests the benefits of MHT outweigh the risks in most cases.

“No one medicine is right for everyone,” Antoniou said. “Ongoing analysis of the WHI (study) has helped confirm that the risk-benefit profile for hormone therapies varies among patients based on a number of factors, including patient age, time since onset of menopause and certain risk factors, and that hormone therapy remains an appropriate treatment option for many women.”

Are there any current disease outbreaks in Colorado? The short answer is YES. 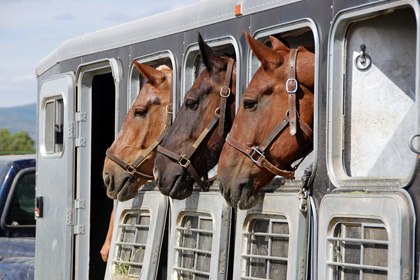